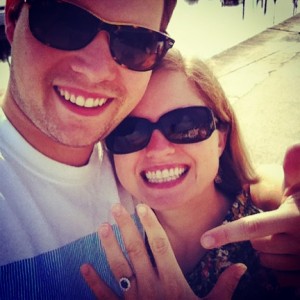 On the sixth of August I went on a cycle ride in the beautiful Kent sunshine with my boyfriend, Alby. We stopped off at a vineyard to taste some local wine where we bought a bottle of ‘Canterbury Choice’. The vineyard owner had started making wine as a retirement project, but the project had got too successful and he was running out of wine so he asked us not to tell our friends about the place – so I won’t advertise his business here (!) despite the fact that he does make an excellent dry white.

Anyway, we continued on our cycle ride, found a lovely picnic spot near the sea, opened our bottle of Canterbury Choice and tucked into a blue cheese and pearl barley salad we’d had for dinner the night before. I lay down with my head in Alby’s lap and he told me to close my eyes. When he said to open them again there was a small box on my tummy, and I was pretty sure I knew what was inside.

I am absolutely thrilled to be engaged to Alby. We got together when we were just teenagers and I don’t think either of us imagined we’d end up marrying each other. But I feel proud that we’ve carried each other through these past 11 years and I have no doubt he’s the one for me.

So, what’s the problem? Getting married has made me think very hard about my feminism. In fact, it was before Alby popped the question that I began contemplating what marriage means. I did a Masters in Gender at the LSE so it’s not like the issue hasn’t cropped up before, but it was during the campaign in the USA against Proposition 8 that I really got thinking. I have always been a strong supporter of gay marriage, and I thought most people I knew were too. So I was a bit shocked when some of my friends were questioning whether gay marriage is a good thing.

The argument rests on the fact that marriage as an institution has perpetuated inequality, so in the words of Dean Spade and Craig Willse ‘Expanding marriage to include a narrow band of same-sex couples only strengthens that system of marginalization and supports the idea that the state should pick which types of families to reward and recognize and which to punish and endanger.’

It’s a strong argument, but for those (like me and Alby) that want to publicly declare their love for each other, make a promise to be there for each other until the end of our days, and cash in on the £200 Tory tax break (only joking!), it’s not particularly helpful. Our decision to marry is about love and emotion and this argument is somehow devoid of that.

I have to say, for those young feminists who are seriously contemplating marriage, there’s not much advice out there. Wedding magazines steer clear of this thorny issue, in fact wedding magazines inspire a whole kind of other anxiety. Their pages are filled with ‘To do lists’ that start 18 months before your wedding. We decided to organise our wedding in six months, so technically I’m a year behind!

Anyway, I digress, there are a couple of good blog posts out there and this one titled ‘Who wants to marry a feminist?’ is full of helpful insights. Lisa Miya-Jervis concludes ‘Marriage, is now, potentially what we make it.’ We intend our marriage to be a partnership and I hope we will be able, in our own small way to redefine an institution, which hasn’t always been a good thing for women. Obviously, where the removal of dead rodents is concerned, responsibility lies squarely with Alby, but apart from that we intend to share the responsibilities of home and work and ask ourselves tough questions if that ever stops happening.

I’m acutely aware that women have a long way to go before we live in anything close to an equal world but I don’t believe marriage needs to be a retrograde step in that journey. Any celebration of love should be cherished, because for anyone who’s been to a wedding or civil partnership, they’ll know it truly is a beautiful thing. Marriage is what we make it and it’s only by getting married, we can make marriage better.

One Response to “I’m engaged! But I’m still a feminist.”