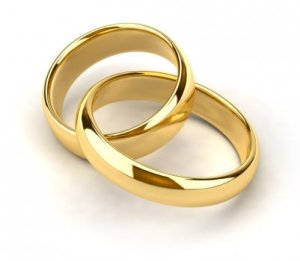 Yesterday it was announced that the Tories plan to go ahead with their plans for a tax break for married couples and civil partners. But what’s a marriage worth: is it £100, £10,000 or even £1 million? If you’re married please feel free to give a valuation in the comments section below.
I’m not married but I have been with my boyfriend for more than 10 years. Our relationship is probably the most important thing in my life (it’s a close run thing between him and our wonderful cats, Bobbie and Minton), anyway, I have to say that I find the idea of putting a price on our relationship rather grotesque. Even more grotesque is that the reported price the Conservatives want to put on marriage is a mere £150 a year per couple. Sounds fairly cheap if you ask me.
The Tory manifesto says that recognising marriage and civil partnerships in the tax system would “send an important signal that we value couples and the commitment that people make when they get married”. But clearly they don’t value it very much – these days £150 doesn’t go very far, so I struggle to understand what the purpose of the tax break is. And if it is to show the value of marriage then why not give the £600 million this will cost to charities that support relationships like Relate?
A week after the government announced £11.5 billion in cuts I don’t think supporting marriage should be the Chancellor’s spending priority. If there’s hundreds of millions to spare let’s support the most vulnerable and needy, regardless of whether they’re coupled up.
I firmly believe that some things in this world you cannot put a price on. In the words of Jessie J we need to ‘forget about the price tag’ because sometimes it detracts from what’s important – healthy, resilient and respectful relationships, in all their diversity. I respect the value that many Conservatives place on marriage, but I think that giving marriage a financial value actually cheapens it.

One Response to “How much is your marriage worth?”