Yesterday I stumbled across an Egyptian news agency called Bikya Masr via Twitter. They were reporting that an alliance of 450 women’s organisations in Egypt is calling for 30% of seats in the Constituent Assembly to be reserved for women under the new constitution.

It’s particularly poignant that women are having to struggle for political representation in Egypt: women played a central role in the Arab Spring and suffered unimaginable pain and humiliation in Tahrir Square. There were reports of beatings, rape and virginity tests. Sadly, it seems their fellow countrymen have forgotten Egyptian women’s contribution to the revolution. 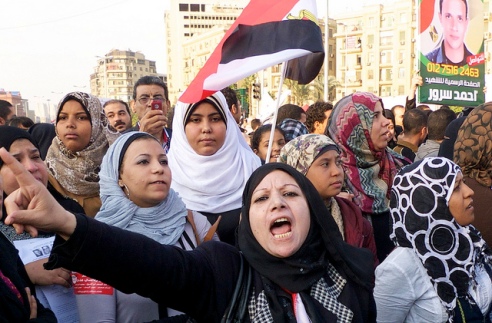 On International Women’s Day (8 March) I feel compelled to highlight women’s struggle in Egypt for a political voice, but also to warn about the pitfalls of quotas as a means to representation and empowerment. Some people think quotas are patronising, because they promote women on the basis of sex not merit; some think they are counter-productive, because people won’t take seriously a woman who got her job through affirmative action; and some think they are unfair because they risk discriminating against more capable men. As you’ve probably guessed I think these arguments are all rubbish!

If we lived in an equal world half of all parliamentary seats would be filled with women and half of all the washing up would be done by men. Ladies, we know it just doesn’t work that way. Many of the women representing the Labour Party in the House of Commons were selected using all women shortlists (admittedly affirmative action rather than a quota). I worked for one of those women, Emily Thornberry MP, who recently joined the shadow cabinet as Shadow Attorney General. Not once did she or any other women MP express that being selected through an all women shortlist had any impact on how they were treated by their male parliamentary colleagues. In fact, I don’t think any male politician could tell you which women were selected on all women shortlists and which weren’t. All women shortlists have proved the only way to get more women into Parliament, and when they were introduced in 1997 the number of female MPs doubled from 60 to 120. Not much progress has been made since and only a quota will change that.

If quotas are so great why am I warning Egyptian women about calling for one? While some describe the quota as a blunt instrument, I’ve seen it used as a technical tool that works against women. Three years ago I travelled to Jordan to research women’s participation in politics. In Jordan, a Middle East country often thought of as being relatively liberal and democratic in the West, there are six seats reserved for women. The monarchy brought in the democratic changes, making them, well, um… not entirely democratic. The quota was engineered so that it massively favours women from sparsely populated rural areas, consequently increasing ‘the influence of tribalism and family considerations’ and ‘undermining the process of choosing candidates on the basis of merit’, according to UNIFEM. A woman in Amman, said to me of the women elected:

Yes, unbelievably, women elected through the quota voted against, or abstained from, a vote to give women the right to divorce, disappointing women activists and leaving it to the monarchy to push through reforms to Jordan’s sexist ‘Personal Status Law’.

Egyptian women have more than earned their right to a political voice and I sincerely hope 30% of seats in the Constituent Assembly are reserved for them. But even with a fair quota, I fear Egyptian women’s voices will continue to be ignored. Empowerment will only be realised when there’s mutual respect, when politicians and the wider public are comfortable with women in leadership roles, and that’s a situation we’ve yet to reach in our own legislature, the ‘Mother of All Parliaments’.

2 Responses to “When will women see the Arab Spring?”