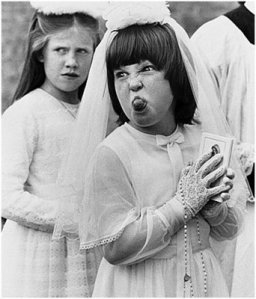 I remember quite clearly the first time I thought Catholicism might not be for me. I was about 9 or 10 years old at the rehearsal for my First Holy Communion. I had to get up in front of the other children and receive the host from the priest. When the priest put the white wafer into my open palms my mind went completely blank — I knew there was something I was meant to say but I couldn’t remember for the life of me what. My mother had drilled me about the importance of good manners, so in the absence of anything better, I said “Thank you.”

Sister Joanna, my Catechism teacher was not impressed. ‘Thank you’ is apparently not a decent substitute for ‘Amen’. In her opinion I was jolly lucky that the host had not been consecrated… if it had been I would have got myself into all kinds of trouble! Instead I got a stern telling off for my lack of respect.

Anyway, David Cameron nicely stirred up the media last week by advocating a return to Christian values in his speech commemorating the 400th anniversary of the King James Bible. He nodded to the importance of other faiths, but he knew that just before Christmas, it would be the soundbite about Christianity that dominated the headlines. Is he right? Can Christian values save Broken Britain?

Religion can undoubtedly provide people with moral guidance and a valuable sense of community but this does NOT mean that politicians should advocate it as a policy measure. In fact, I find it very alarming when our political leaders turn to god for solutions and stop rummaging around in the policy toolbox. When Cameron said ‘the Bible has helped to give Britain a set of values and morals which make Britain what it is today’ I’d love to know specifically which values he was talking about and which interpretation he had in mind. For there are many ways to interpret the Bible, both literally and liberally, and given that it’s a text of many contradictions it’s hard to know which parts the Prime Minister believes can restore our broken society.

Ultimately, it was my mother’s emphasis on good manners rather than Sister Joanna’s paranoia about ceremony that had more influence on the person I am today. Cameron cited the riots, the expenses scandal, and the financial crash as demonstrations of our moral degradation. But he has nothing to prove that in nations of greater Christian faith such moral breakdowns do not occur or are less frequent. Cameron should spend the Christmas break pondering what he can do through policy making to make Britain a better place and leave the preaching to the church.